When someone says “Glastonbury” hippies, music, mud and fields filled with tents all come to mind – conjuring up imagines of the legendary Glastonbury Festival. However, Glastonbury has a long history, rich with legend and folklore. From the sword in the stone to the knights of the round table, King Arthur’s legend has spread from Glastonbury around the world.

The legend of Arthur has been depicted in film, TV, literature and a whole host of other mediums.

Glastonbury is thought to be the burial place of King Arthur and his wife Guinevere in the Abbey. Monks later heard rumours of the burial and found a stone slab with these words inscribed:

King Arthur is depicted in medieval writings as a great warrior, accompanied by his knights of the round table, his life is shrouded in myth and legend.

Arthur was born in Tintagel to Uther Pendragon and later married Guinevere. He was accompanied by the wizard Merlin. In 1485 the story of a 5th Century Celtic war leader was so popular that it became one of the first books ever published in England. 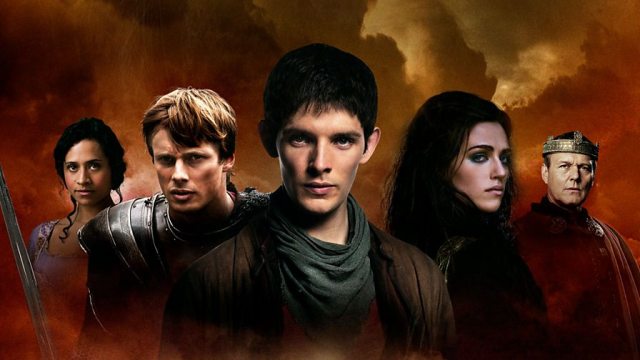 Excaliber is the famous sword which protects those who wield it from any harm or danger. Excaliber and the sword in the stone are two different swords, one protects Arthur and the other proves that he is the rightful king when he releases the sword

The Tor – originally a site of pre-Christian worship, is the highest hill surrounding the city of Glastonbury. 2000 years ago, it was surrounded by a lake called Ynswitrin – The Island of Glass. In Celtic folklore, Avalon was an isle of enchantment where the dead met. This legend has inspired people to make pilgrimages to Glastonbury throughout the ages.

After Jesus was crucified, legend says that Joseph came to Britain with the Holy Grail. This was the cup used by Jesus at the Last Supper and was used by Joseph to catch Jesus’ blood whilst he was on the cross.

Joseph arrived at the Isle of Avalon and stuck his staff into the ground… which later grew into a thorny bush, known as the sacred Glastonbury Thorn. He buried the Holy Grail in a spring where the water would grant eternal youth to the lucky drinkers.

It was thought that only the most noble knight would succeed in their quest to find it.